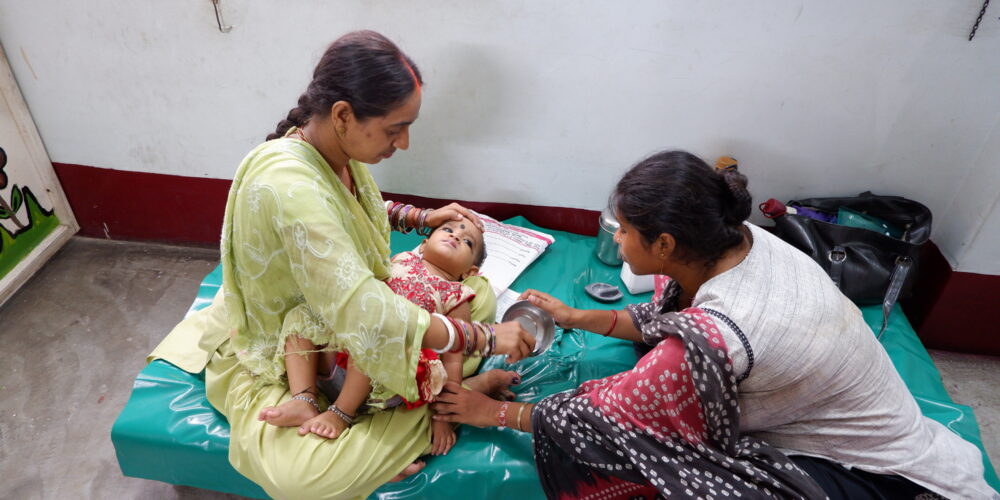 In the video, the Haitian child was listless: his eyes were sunken and his shriveled body was limp. His mouth curled, turtle-like, to prepare to cry, but no tears came. A gloved hand, arm hairs poking out, reached for the skin around the child’s abdomen. The hand of the clinician pulled gathered skin to form a sinusoid mound. Then, instead of snapping into place as skin normally does, the mound slowly melted back like silly putty. The words “SKIN PINCH” scrolled across the bottom of the video.

The skin pinch is one of the main diagnostic criteria for testing severe dehydration. In those severe cases in which the body has lost more than 15% of essential fluids, the little fluid left in the body rushes to the skin to cause the counterintuitive effect of swelling. Taped during a cholera epidemic in Haiti, the CDC video was showing how to best manage dehydration. The child had become severely dehydrated from the watery diarrhea that is a common and deadly symptom of cholera infection. By the end of the video, thanks to provision of the best possible treatment, the child was healthy and alert.

This “best practice” is something we are replicating in the slums of Fakir Bagan at Calcutta Kids with our Rehydration Unit. The Rehydration Unit allows us to tackle the terrible effects of diarrhea on the children under the age of three in our area. I reviewed this CDC video to train our community health workers to diagnose and deliver key messages in the Rehydration Unit. One of our four main objectives at Calcutta Kids is to ensure that children age 0-3 grow normally. Diarrhea, the cause of fatal dehydration, is one of the central culprits in preventing normal growth, since it’s been linked to stunting and slower brain growth (1).

There is no reason any child should ever grow less or die from diarrhea. Yet this preventable and easily treatable disease takes 1.3 million under-five lives a year, a large proportion of those in India (over 1,000 daily on the subcontinent) (2). With counseling on hygiene practices, we can prevent diarrhea by stopping the root cause of microbial transmission. Additionally, the best treatment for diarrhea is the simple and cheap solution of “oral rehydration solution” or O.R.S.

The Rehydration Unit is built on lessons learned from previous experiences with fighting diarrheal prevalence in Fakir Bagan. Analysis of Calcutta Kids’ growth monitoring data from 2010 showed a strong correlation between low weights and having had diarrhea in the two weeks before weighing. This connection spurred a desire to focus in on diarrhea, as both a cause and effect of malnutrition. After studying the highly successful model of the International Centre for Diarrhoeal Disease Research (icddr,b) in Bangladesh, Calcutta Kids opened a Diarrhea Treatment Center in March 2011 using funds awarded by a World Bank competition.

This first foray into treating diarrhea was highly successful, but in creating the Rehydration Unit, we sought to learn from the weaknesses of the DTC initiative. Funded by a grant the World Bank, Calcutta Kids had rented a separate space with a separate staff roster dedicated to the DTC. For the Rehydration Unit, we’ve gone in a different direction. While retaining the essence of the DTC (O.R.S., Zinc, counseling), we wanted the Rehydration Unit to be an integrated part of the central maternal and child health initiative of Calcutta Kids in terms of funding and staff. Health workers, with whom the mothers of the community are familiar and have a rapport with, deliver the innovative BCC materials (from games to demonstrations) and conduct the follow-up visits in the home. Funding is no longer dependent on external grant cycles.

Each 90-minute treatment at the Rehydration Unit has been divided into prevention and treatment modules for counseling. Along with counseling, we have adapted practices from the W.H.O on how to best manage diarrhea with O.R.S. and Zinc while learning from our experience with the Diarrhea Treatment Center. This combination of counseling and the clinical treatment at the Unit (all administered by the community health worker) allows us to treat the short-term problem of diarrhea and dehydration in the most effective way possible while changing behaviors to prevent diarrhea from occurring in the future. The protocol and the rehydration unit checklist has been designed to include all these facets and create a conducive environment for health worker-mother interaction.

We have deliberately called the new unit, attached to our daily health clinic, a “rehydration” unit rather than a “diarrheal treatment” unit. Calcutta Kids is seeking to change perspectives on what the ideal treatment should be for diarrhea. Rather than treating diarrhea with anti-diarrheals or anti-microbials (as is common in most of India), the treatment at the Rehydration Unit calls for replacing the lost fluids with O.R.S. to restore the body’s fluid balance. O.R.S. is nothing more than a carefully balanced salt, sugar, water solution that restores the natural transport systems of the intestines. Despite its simplicity, it remains the gold standard for treating diarrhea. It’s discovery, like many scientific advancements, was accidental but fortunate.

In the early 1970s with the Bangladesh War of Independence raging, refugee camps were overflowing and cholera was highly prevalent. The standard treatment was “intravenous fluids while starving the gut,” but the clinical staff ran out of IV therapy. In these desperate circumstances, one Calcutta doctor, Dilip Mahalanabis, decided to try an untested and new treatment: O.R.S. Miraculously, the mortality rates dropped to 3.6% instead of the normal 30% to 40% with IV fluids (3). Calcutta Kids has had the good fortunate to spend time with Dr. Mahalanabis on a number of occasions and he advised us with the DTC.

In India, only 31% of doctors prescribe O.R.S. for diarrhea (4), and often antibiotics are overprescribed. The first component of the behavior change communication modules aims to change these perceptions in the mothers of Fakir Bagan, and hopefully enable the mothers to use O.R.S. themselves at home in cases of diarrhea.

The Rehydration Unit is an example of the innovative and deep thinking way in which Calcutta Kids functions. Calcutta Kids is bringing the most effective, scientifically verified solutions to a community that needs them. Efforts like this will make child morbidity and mortality from diarrhea a fact of the past.–Pranav Reddy