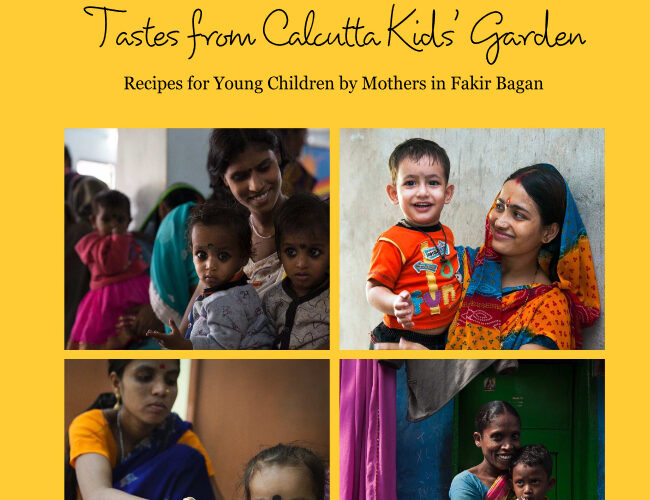 Calcutta Kids has self-published a cookbook which we are pleased to share with our community of well-wishers.

This story behind the creation of this cookbook emanates from an e-mail correspondence with some Calcutta Kids well-wishers responding to our annual update. I had discussed in the update a new and innovative undertaking carried out in the Calcutta Kids community health center – a series of cooking competitions similar to those often seen on television, but, in this case, aimed at the preparation of foods for young children between the ages of 6 and 36 months – a critically important time for these children, and a particular challenge for time-constrained mothers. The idea caught on quickly: at the first competition, 20 mothers participated; at the second 70. Prizes went to the moms whose recipes were nutritious with dietary diversity and could be prepared quickly and easily.

The well-wishers complimented us on the creative approach and then added, almost as an afterthought, “Be sure to let us have a copy of the cookbook, if you decide to publish it.” Our community health workers and the beneficiary mother jumped at the idea; happily, we had retained all the recipes.

So here it is: a cookbook with recipes created by health workers and mothers of Fakir Bagan, the impoverished urban community where Calcutta Kids programs already had achieved such extraordinary progress. Along with it comes the emergence of an imaginative public health nutrition intervention focused on behavioral change communications. Yet even more important than the intervention, however, is the story of unusual resourcefulness – both on the part of the health workers and the friends of Calcutta Kids – in generating creative energy among particularly low-income mothers who, like so many women in Asia, Africa and Latin America, are plagued with multiple stressors and, often, low self esteem. Engaging and empowering these mothers is the important narrative here and, like others of its kind, worthy of energetic replication.

For more information about this project and to see the cookbook itself, click on the link below to download a pdf. If you would like a hard copy of the cookbook, don’t hesitate to reach out to us at info@calcuttakids.org.